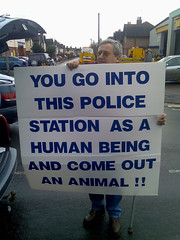 Highest scorers in the 2009 CPI are New Zealand at 9.4, Denmark at 9.3, Singapore and Sweden tied at 9.2 and Switzerland at 9.0. These scores reflect political stability, long-established conflict of interest regulations and solid, functioning public institutions.

You may also like:
Video: How Ordinary People Become Monsters Or Heroes
Philip Zimbardo knows how easy it is for nice people to turn bad. In this talk, he shares insights and graphic unseen photos from the Abu Ghraib trials. Then he ...
READ MORE
Before You Choose Your Running Shoes…
via Lifehacker,Knowing your foot type is useful for purchasing the proper running shoes, among other things. Using the "wet test" can help clue you in on whether you have normal, ...
READ MORE
Video How Bill Gates Is Trying to Change the World Now
Bill Gates hopes to solve some of the world's biggest problems using a new kind of philanthropy. In a passionate and, yes, funny 18 minutes, he asks us to consider ...
READ MORE
Video: Amazing Underwater Astonishments
Finish the video and you will be amazed how fascinating the ocean is! A pioneer in ocean exploration, David Gallo shows jaw-dropping footage of amazing sea creatures, including a color-shifting ...
READ MORE
Video: Evolution’s Counterintuitive Reasoning on Cute, Sweet & Sexy Things
Why are babies cute? Why is cake sweet? Philosopher Dan Dennett has answers you wouldn't expect, as he shares evolution's counterintuitive reasoning on cute, sweet and sexy things. For a ...
READ MORE
Video: 9 Life Lessons from Rock Climbing
In this talk from TED University 2009, veteran rock climber Matthew Childs shares nine pointers for rock climbing. These handy tips bear on an effective life at sea level, too. ...
READ MORE

Lesbians in Singapore [video documentary]
One of the few documentaries ever made about lesbians in Singapore, this documentary, filmed in 2006 uses interview footage with three Singaporean lesbians -Amanda Lee, Sabrina Renee Chong and Gea ...
READ MORE
Singapore Is No. 1 in Innovation, Well Ahead of U.S.
Is Singapore number one in innovation? True. Business Week reports Singapore's emphasis on science education and a highly talented workforce puts it well ahead of the U.S. in a new ...
READ MORE
Video: How Ordinary People Become Monsters Or Heroes
Before You Choose Your Running Shoes…
Video How Bill Gates Is Trying to Change
Video: Amazing Underwater Astonishments
Video: Evolution’s Counterintuitive Reasoning on Cute, Sweet &
Video: 9 Life Lessons from Rock Climbing
Lesbians in Singapore [video documentary]
Singapore Is No. 1 in Innovation, Well Ahead
Facebook Comments