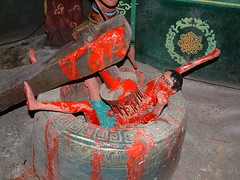 I saw Haw Par Villa for many times – on buses or taxi. Today I passed by this place again and my curiosity was killing me; so, I did a little research on Haw Par Villa and now share with you my findings.

These include The Laughing Buddha, The Goddess of Mercy, The Romance of the Three Kingdoms, and most famously The Ten Courts of Hell, a depiction of a gruesome underworld of tortures and torments set in the mouth of a 60-meter-long dragon. Interesting, isn’t it?

The park, originally called “Tiger Balm Gardens“, was constructed in 1937 by the brothers Aw Boon Haw and Aw Boon Par, the developers of Tiger Balm, as a venue for teaching traditional Chinese values. The Aw family eventually sold the Gardens to the Singapore Tourism Board in 1979.

The park was renamed Haw Par Villa in 1985 and re-opened in 1990, when it was converted into an amusement park and promoted with the name “Dragon World“, with many of the statues and scenes replaced with fairground rides. However this new incarnation proved unpopular when attendances started to decline and Fraser and Neave, which had 75% stake in the theme park, started seeing losses. More recently many of the old features have been replaced, such as the dragon ride. Some of the statues have also been moved to the Chinese Gardens.

Entry to the park has been free since 1996, while previously a S$16 entrance fee was charged and a Chinese Heritage Centre has been constructed within its grounds.

The sad thing is, Haw Par Villa park is in a run down state. Many of the water ponds are covered with algae.

How to Get to Haw Par Villa

The future Circle Line Station, Haw Par Villa MRT Station (CC25) would be located next to it.

Walk You Into Universal Studios Singapore
Universal Studios Singapore is a new theme park located within Resorts World on Sentosa Island, Singapore. It was a key component of Genting's bid for the right to build Singapore's ...
READ MORE
Before You Choose Your Running Shoes…
via Lifehacker,Knowing your foot type is useful for purchasing the proper running shoes, among other things. Using the "wet test" can help clue you in on whether you have normal, ...
READ MORE
Linkin Park – Valentine’s Day
Happy Valentine's Day! Whether you have a lovely partner for today or not, enjoy your day!
READ MORE
Video “Nobody”: Korean Wonder Girls V.S. Chinese Guy
Ok. The same dance by different people. This first video below shows Wonder Girls performing Nobody at M! Countdown. The second below below shows a Chinese guy performing the same ...
READ MORE